started a topic almost 5 years ago

I have reported all the cheaters that I know for sure in the game because some of them are very obvious. However, this issue has yet to be resolved. I would like to be able to get back into the game after being wiped so that I can see the end of the game and figure out who's cheating for real. This game is not fun at all if people cheat and I am considering to find something else more entertaining and healthy to play.

20 people have this question
480 CommentsSorted by Popular
T

said over 1 year ago
You suck cock.
J

said over 1 year ago
Douche
B

said over 4 years ago
Ok, I'm a novice, but can't it appear as though theres cheating when it's merely an alliance of convenience? I know once, because I had no other real option, I would have borders with only one with an alliance with somebody. I know they could break it, but I have no real choice. I imagine it could look like cheating.
W

said over 4 years ago
Brent you're absolutely right. Leaving borders unprotected is very common. I think it is impossible to tell from game play alone wether someone is using 2 accounts in the same game or if it is just an alliance of 2 players.
c

@Phillip@SMG - That's a tough sell. In my ~200 games played I've only submitted a report for one game that had blatant cheating. In the month since the report I haven't heard anything back from SMG, and the player (Slate Skulls 8) is still active in the Grandmaster ranks (see image). 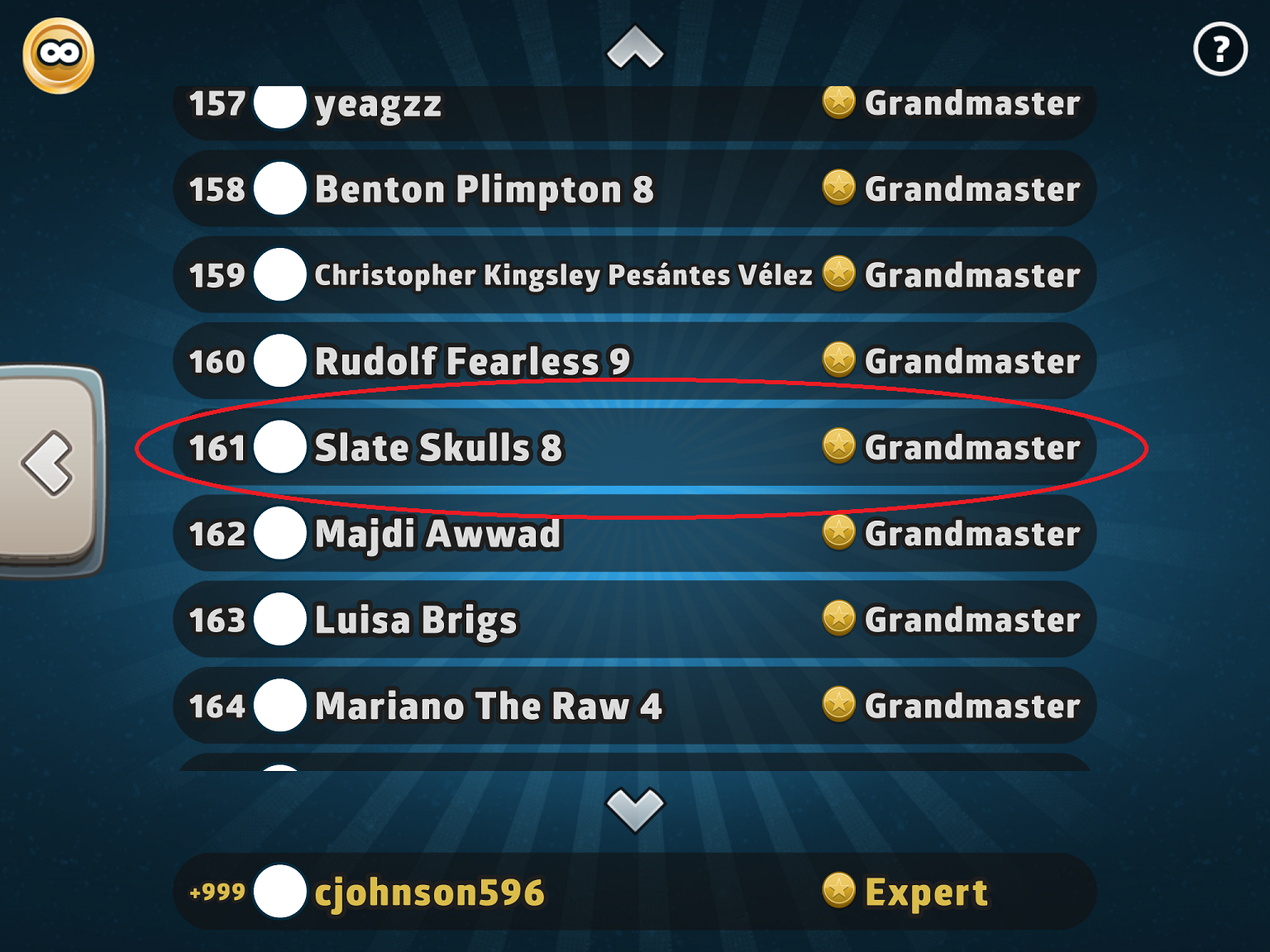 I'm not inclined to submit a ticket to SMG again based on this experience. However, here on the forums I can share a cheating player's name and other players can watch for them to prevent them from their own games.

said almost 4 years ago
Another one today: “Expert” Alfonso Nelson 2 is a two account cheater. His dummy account is Dana Chief 5. In the game in question, they were Purple and Yellow. Early in the game, Yellow defended the entrance to Australia while purple took control or it. Later, the cheating became more obvious. In the first attached screenshot you see Yellow positioned to prevent the Orange (a bot by this time) from spreading into Purple’s area. Yellow does not attack Australia, which Purple has left undefended. In the next picture, Yellow is again in a position to devastate Purple but does not, and Purple is proceeding with the obvious knowledge that Yellow is not a threat. In the next screenshot, all pretense is gone. Purple now has Asia and Yellow is actually helping to defend the border, rather than attacking easily. Finally, in the last picture, all other players are now eliminated. Predictably, at this point Yellow simply stops playing, despite having sufficient armies to attack. Yellow never attacked again and simply allowed Purple to win. I hate these people who use two devices to cheat. There has to be a way to stop this. Ticket submitted.

said over 1 year ago
Matt, some more of your fellow cheaters: Red took me out then just sat there as purple took over the world. You cheaters are pathetic.

Hi Ray Lok,
I've seen others do this, too; that is, gain a territory card without winning any territory it seemed. How can anyone cheat like this? SMG folks, if you're reading, how is this possible?

Birdie Rossi 6 & Sven Gudelj seem to be the same player.  All borders are protected by 1 piece at all times.  I hit one the other one immediately attacks me even though we were allies.  It is just not how two different players normally play.  Please check and suspend them.  I am quite sure they are on the same IP.  Impossible to get a fair game with cheaters.

It is strange that you cannot access the ticket. We have it still and can access it through the link. As the ticket comment says we have processed it and will be investigating shortly.

I honestly thought my game of six was totally clean! Daily I play and don't see cheaters.

I'll let the Grand Master speak for himself..

Jason, any thoughts how to stop all the cheaters you see ?

said over 4 years ago
When. It is obvious to me that 2 people are ganging up on me, I throw all I have at the weaker one then leave. I figure, at least the weaker will have no chance of winning after I go. Why bother to play a game you can't win? Don't give them any satisfaction.
Login or Signup to post a comment
More topics in General RISK Chat
See all 496 topics